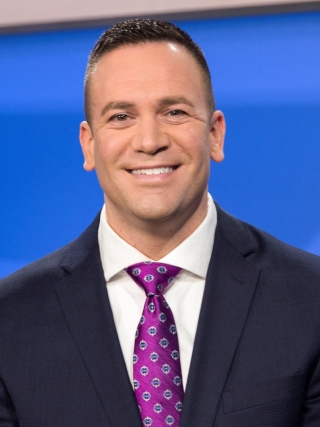 Ryan Cummings anchors NBC 24 News at 6 & 11 p.m. He brings more than 12 years of experience to the anchor desk and has worked as a reporter, photographer, producer and anchor. His career has taken him to some of the top TV markets in the country including Milwaukee, Phoenix, and Chicago.

Before coming to NBC 24, Ryan was a weekend anchor in Louisville, Kentucky, where he quickly learned all about the Kentucky Derby, horses, whiskey and bourbon.

Ryan got his start in the TV business in Rapid City, South Dakota. He spent a year covering Native American culture, the Sturgis Motorcycle Rally, and the strange unpredictable weather. His most memorable story in the Black Hills was when he hiked to the top of Mount Rushmore and stood on the presidents’ faces.

While anchoring in Rockford, Illinois, Ryan started a segment called “Going Green”. He understands the importance of recycling and loves learning new tips and tricks to help others save energy and protect the environment.

Ryan graduated from Olivet Nazarene University south of Chicago and grew up in Northeast Indiana.

When Ryan isn’t in the newsroom, you can find him watching Judge Judy, golfing, or trying his luck at the casino. He also knows nearly every word to Willy Wonka and the Chocolate Factory (1973).